Kaiju Wars is a combat game that takes place on top of Tokyo where two teams of Kaijus fight to the death in a city full of skyscrapers and people. The game features an interesting take on traditional card-based games, with each player being represented by one card at hand which can be played during battle.

Kaiju Wars is a tense yet satisfying kaiju battle game that allows players to take control of one of the titular monsters and fight for survival against other giant beasts. The demo is available on Steam, so you can try it out today! 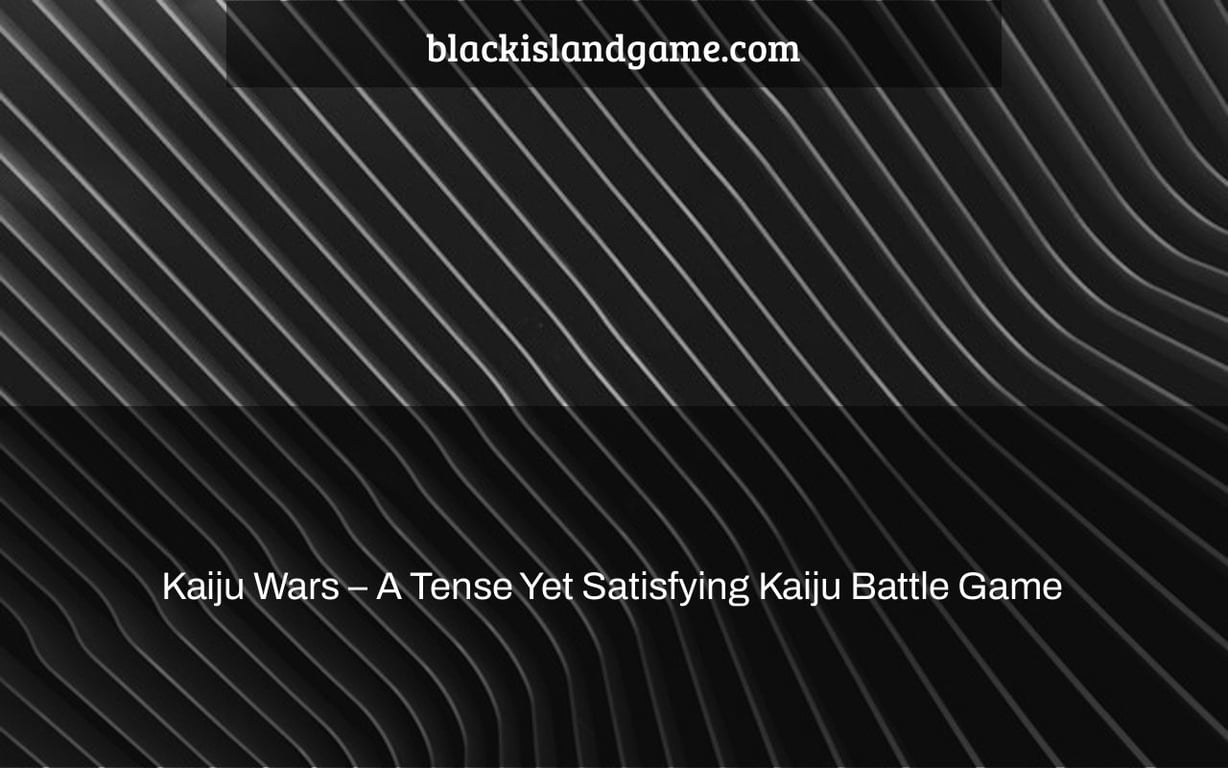 Kaiju Wars is a new turn-based strategy game developed and published by Foolish Mortals Games in which you must defend your city against Kaiju invasions. As huge Kaiju destroy and rip through communities, you must command your forces and protect military sites as well as research laboratories, while simultaneously attempting to rescue your inhabitants. This is a new twist on the genre, being a turn-based game, and after playing it, I can confidently state that it has done honor to the game. This is our Kaiju Wars review, in which we resist several Kaiju but fail to protect our cities against their onslaught.

When you first start the game, you’ll note that the menu is rather dynamic and seems to be an ideal control center for monitoring all Kaiju action. There are several icons in the shape of various items that you may interact with to do various operations such as beginning your campaign, accessing the map editor and preferences, and so on. You may browse the menu by turning left and right, which takes some getting accustomed to. There are many displays in front of you with snippets from different original Kaiju films playing, and clicking them brings up a browser where you may watch those films. Any additional option you choose will also be shown on this screen.

Kaiju Wars is a large storyline with over 50 missions to complete, which takes a long time to complete since each mission takes its own sweet time to complete. Aside from the major goals that you must accomplish in a mission, there are subsidiary missions that are optional but offer you an extra medal to add to your collection if you complete them. Medals are needed to unlock several additional features in the game, such as the Godzilla 2 bonus gallery level seen in Kaiju Wars’ main menu. The plot is told in the manner of a comic book, with each image representing a cutscene, a news broadcast, the main story mission, or an extra objective that may be completed for additional medals in the game.

Kaiju Wars has an excellent overall presentation, and I really like the game’s aesthetics and vintage presentation. The game’s screen is tiled and folded from the edges to give it a VCR effect, with extra lines blurring the picture even more. The graphics are really stunning, and they stand out from the rest of the game right away. Before beginning a quest, you may pick between Normal and Hard difficulty levels, as well as see how other gamers across the globe performed the assignment. You may set a goal for how many buildings you can rescue at the conclusion of your defense against a Kaiju onslaught. While they aren’t strictly necessary, if you want to see your name at the top of these lists, you’ll need to work on them.

Because of the open narrative advancement mechanism, you may play each mission as many times as you like without affecting your story progression. You can only advance your tale if you wish it to; otherwise, you may play as many unlocked missions as you like. You are introduced to the laboratories after completing the first instructional missions, where you must produce the kaiju-repellant serums before the Kaiju destroys all of the accessible labs on the map. Each map is different and depicts a different city. Kaiju are foolish and sluggish, and they move slowly, but they can attack powerfully, and one hit is enough to level a building in your city, which you must let to happen since your purpose is to protect the city.

However, in Kaiju Wars, devastation is unavoidable, and you will see lots of your structures crumble. Your defense is provided by your armed forces, who include ground and air troops, as well as special mechs and larger, improved combat units later in the game. You only have a limited amount of movements every round since this is a turn-based strategy game. At a given installation, for example, you can only construct or repair one unit. Each unit in the game has its own restricted travel route throughout each round, and built troops cannot move on the same turn that they are acquired. Once you’ve used up all of your turns, you must stop and wait for the Kaiju to take its turn, during which the Kaiju will advance and destroy everything in its path. Certain troops in the game, like as tanks, may slow down the Kaiju’s progress, but you must find it out.

Apart from the rampaging Kaiju destroying your city, you also have a dark group called Operation that is supporting the Kaiju in their own manner. Following the Kaiju’s strike, these Operations vary from stealing your information to disclosing your laboratory’s location to restoring the Kaiju’s huge health. Because you can’t kill the Kaiju in the game, you’ll have to keep it occupied until your doctor can make the repellent serum, which causes the Kaiju to flee immediately. As a result, your labs are very valuable and a top target for the Kaiju. These operations attempt to uncover your laboratories, and if discovered, the Kaiju will go directly for it in order to destroy it, and will do so until the lab is completely destroyed.

If this occurs, you may detach your doctor and lead them to a different lab to continue the Breakthrough procedure. The Economy turn is when you gain scientific points from your laboratories and tax from surviving structures throughout a cycle of turns. This tax money is used to build additional facilities, army units, and fighters. Because this is your major source of revenue in the game, the more buildings the Kaiju demolish, the less money you make each time. This necessitates your keeping the Kaiju occupied and away from your local structures. The Kaiju usually target what is closest to them, so you may take advantage of this, but you must prepare ahead in each situation.

As your crew learns more about the Kaiju, you may give them new names to make them seem less fearsome, but this will have no effect on their real behavior. The gameplay is demanding, and if you make a mistake, the game will penalize you severely, particularly on the high mode. One of my favorite things about Kaiju Wars is that it delivers good turn-based gameplay while still not taking itself too seriously. When a city gets blasted to pieces by a Kaiju, nearby cities pass amusing remarks, and when you ultimately save them from a Kaiju assault, they pass humorous comments. It’s really fantastic how this game manages to balance both laughter and seriousness.

As you continue through the game, you will be able to create your own Operations deck or utilize pre-made cards during fights. These Operations are cards that you may play in each move to earn different advantages that can counteract the secret organization’s usage of them to help the Kaiju in the game. These cards may be used to create free installations, acquire reduced laboratories, receive free idea war machines, and even get some emergency cash for your construction requirements. This also works for Kaiju, as the secret organization assisting the Kaiju may use its irritating Doomsday Clock card at the end of their deck to restore a large portion of the Kaiju’s health. Consider this as you prepare to battle the Kaiju.

Then there’s the game’s fantastic graphical style and wonderful cutscenes. Kaiju Wars’ presentation is really stylish, and I am completely enamored with how the creators have presented the game in such a fascinating way. The aesthetics are classic, with most locations focusing on single hues, and the special effects are outstanding. Attack animations and how the Kaiju react to the surroundings around them are also quite impressive. The great sound design and the classic music with the bumps in the background make this even better. The whole game’s theme is a magnificent sight to see. Everything in the game, from the main menu to sequences depicting Kaiju rising from their burrows and more, seems entirely in sync, and I appreciate how well-thought-out even the smallest details are.

Kaiju Wars is ideal for those who wish to devote a significant amount of time to a game. It may seem that the game becomes monotonous after a while, but the restrictions vary at each level, and you are sometimes faced with some really strict requirements, so it keeps you on your toes. Create your own conflicts or attempt one of the weekly challenges if you need a break. I felt like I was fighting a losing war most of the time, but a last-minute choice allowed me to win the battle, and occasionally I lost a winning battle. Battles in the game are unpredictable, and one last-minute move may dramatically change the dynamics. You just have to push yourself past the first few levels before being drawn into the universe of Kaiju Wars. This is, by far, the greatest turn-based strategy game I’ve played in the year 2022.

As a great Kaiju fan, I had been looking forward to Kaiju Wars since it was announced, and when I finally got my hands on it, I was ecstatic to find that it was all I had hoped for. While it may seem to be wacky and old, Kaiju Wars is a great and suspenseful strategy game that will keep you on your toes throughout. It contains a ton of content in the standard game, and with the custom map editor, it has an almost infinite lifespan. The kaiju designs are fantastic, the battles are exciting, and the soundtrack is well suited to the game’s concept. You can tell that the game’s creators were real Kaiju enthusiasts who put their heart and soul into it. I’m loving my time with the game after spending over 20 hours with it, and I’d suggest it to anybody seeking for a great-looking turn-based strategy game. If you like Kaiju and large monsters fighting mechs and tanks, this is a must-play.

Kaiju Wars is a tense yet satisfying Kaiju battle game. The game is available on PC, Xbox One and PS4. It’s a fast-paced game where players must build up their own army of kaiju to fight against other players in multiplayer battles. Reference: dorfromantik.

Dead Space Remake: We Know The Release Date, And It’s Going To Be Scarier Than Ever! [VIDEO]

What is Poise stats and how to increase Poise