A new role for chicken has been approved by the American Gaming Association. The “ambulance chicken” will be called upon to help players resurrect chickens in games, similar to what paramedics do with human patients.

The “grady ems academy” is a new hybrid role in the game of “Fortnite”. The role will be available on September 26th. 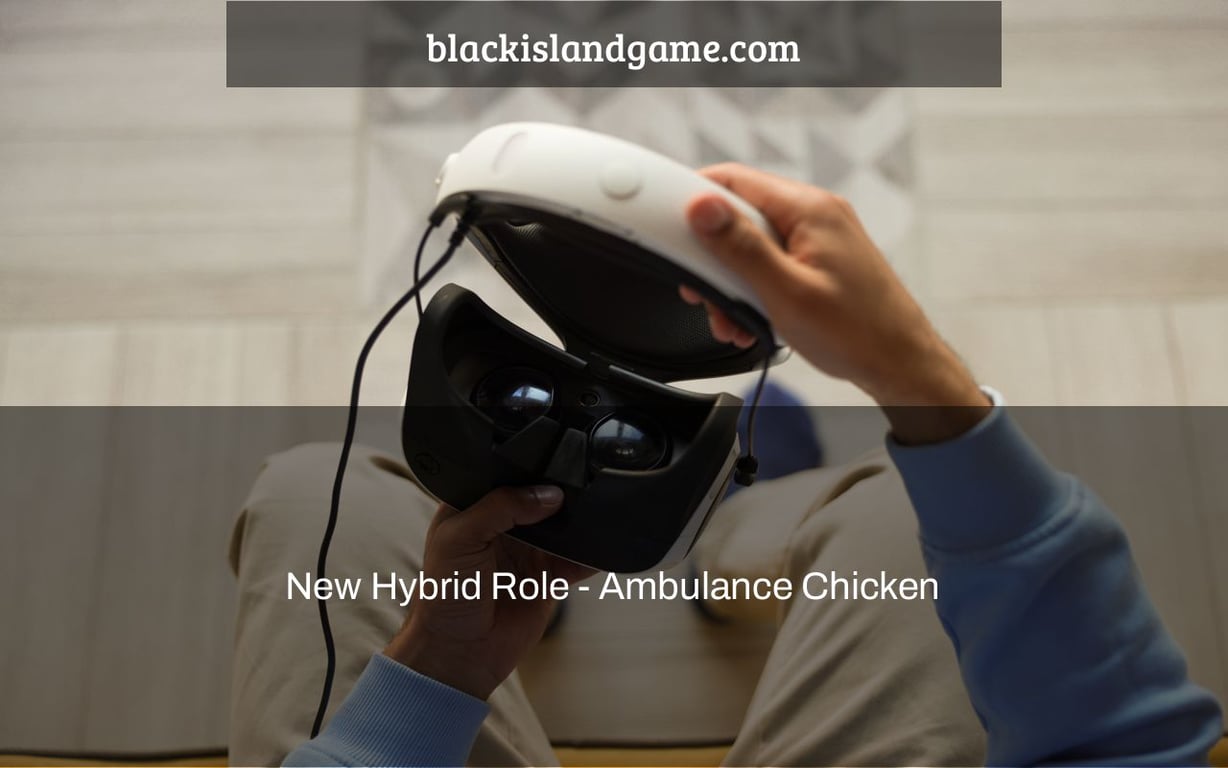 To begin, despite the moniker, I am serious about this; I believe this is a viable new function that may be used, but I would not do it myself. It won’t be OP, meta, or revolutionary, and it’ll almost certainly take testing and practice to even be functional.

I also have no idea what I’m doing; if you look at my logs while playing this, you could critique everything I do; I have no idea how damage is distributed in battles, and I’m messing up my DPS rotation a lot. If someone who understands what they’re doing performs this, it’s feasible to get another 1-2k DPS and additional healing. I’m effectively raiding at a Heroic level rather than a Mythic level.

Many raid encounters feature damage that comes in bursts and bursts alone, thus healers either sit and DPS while nothing is happening or attempt to snipe each other’s heals. There isn’t usually a lot of healing necessary.

It’s important to remember that this is a Healer role, not a DPS place.

I feel a Moonkin, namely a Night Fae Moonkin, may perform the same role. Convoke throws its spells based on shapeshift form rather than Spec, thus a no-form Moonkin will cast a Restoration Convoke, which is exactly the same as a resto’s, complete with flourish and all the fun things.

The concept is that the Moonkin will deal basic Moonkin damage, do its base rotation, and sometimes use Offensive Convoke to deliver DPS; a base Moonkin can sit at least 6-7k DPS without using a Covenant ability or a legendary. Healing is not always required; a damage Convoke on pull is sufficient unless you need healing after 20-30 seconds.

The amount of healing a Moonkin can do when doing 6k DPS is around 7-10k HPS. The majority of this comes from 4 second spurts per minute; a Resto druids convoke is our convoke, thus we can deal out anything from 30-60k HPS in those 4 seconds, depending on procs. We can send out Rejuvs, Wild Growth, and Swiftmend as needed, but other from that, this is all that is required.

Now, I say 7-10k HPS, but that’s just if healing is required, which is the idea of this; healing isn’t always required; you may sit at 4- 5k HPS and dole out more damage instead, which is absolutely acceptable. Only heal when it’s really required.

The Phase of Testing

I conducted some preliminary testing on this… I’m hoping the problem was with the player rather than the concept.

Because photos aren’t allowed on this subreddit, a link will have to suffice.

I did 5k DPS and 7k HPS, but keep in mind that I have no idea what I’m doing and this was my first effort, so I could have done a lot more DPS. The most significant part is how I fared in comparison to the other healers, and it was pretty much as I expected: I did roughly 4-5k more DPS while doing less than half as much as they did. There was no need for any further healing.

Because I died on kill, I used Mythic Remnant Wipe.

It was a 2% wipe, so it wasn’t flawless, and I have to compare myself to the other healers, since I am taking up a healer position rather than a DPS one.

The third protocol of the Mythic Guardian

Because someone missed the bomb, we didn’t have the typical healing CDs for this procedure. This was a standard non-flourish Convoke that healed the raid enough before the second cast, and the HoT continued to tick thereafter. If Flourish had been used, the healing would have been doubled, and if I had used HoTW, it would have been enhanced by another 30%. This is the role’s purpose: burst healing followed by DPS for the remainder of the time.

The main reason Holy Paladins were so effective in Castle Nathria wasn’t because of their healing abilities, but rather because of the amount of DPS they could deliver. There’s no need to have a lot of healing going on all the time; large damage happens in bursts, not over time. When you can basically have 3.5 healers and 0.5 DPS in a battle due to the healing CDS needed, having four healers is a waste.

What’s the state of the meta right now? AoE Damage Reduction spells such as Darkness, Anti-Magic Zone, Barrier, Spirit Link, and Spirit Shell are the most common. A Restoration Druid brings none of these; they have Tranquility, which provides a lot of HPS but is really just a worse Ashen Hollow, Ironbark for the tank, and high raid wide HPS in general. A Restoration Druid isn’t really useful in the current meta, and remember that a Boomkins Healing Convoke is identical to a Restorations Healing Convoke. Bringing a Resto Druid for a healing CD represents a DPS loss if the raid’s overall HPS need has been met by the other three healers. However, bear in mind that the Restoration Druid is usually the one that does raid-wide healing to keep everyone alive. Granted, Convoke does not provide DR, but the idea is to fast heal the raid when necessary.

This hybrid build is expected to be stronger in 9.2, with the Convoke legendary becoming common and the Moonkin choosing between Arcanic Pulsar for increased DPS or the HoTW legendary for a 30 percent boost in output. In comparison to now, NF Moonkin will be closer to the other covenants.

This will take some time to master, but if there is someone out there who understands what they’re doing, it may be possible. But the idea is that this would only heal if it was really necessary, and it would DPS otherwise.

This would be considerably stronger in M+ with a Protection Paladin and 4 DPS roaming about, but even without Convoke or Venthyr, a Boomkin can still do a lot of AoE damage, particularly in Incarn/CA.

But, for the time being, a Feral Druid would be a better fit for this position, and that’s when it struck me. A feral druid healer is already performing this as part of an off-meta squad. They were doing 24/25s the last time I heard about them, which was months ago. Convoke will totally heal the party, Wild Growth and rejuvs will also do a lot of healing, and the Protection Paladin will take care of the rest. I performed a 24 Tyrannical Spires run with a Protection paladin, and the healer disconnected as soon as we reached the second fight. The Protection Paladin solo healed the second monster with no problems; however, the healer did not return, and he struggled with Tormentor straight after the second fight, which is when the healing Convoke would come in handy. A DPS Druid in HoTW could very much alone heal a Pride at the +22 level, as we saw in Season 1. (Which was a high key level at the time).

Every other stat will raise both DPS and HPS, while any mastery on the gear will increase both DPS and HPS. Boomkins in typically aim to focus on mastery, therefore this is the polar opposite of their gearing. Not that any Boomkins would do this, but this is supposed to be a healing location.

It’s tough to find a place for a position like this since it’s quite esoteric, and it’s a risk to attempt it. I could imagine a scenario where you go in with four healers early on, then as you grow acclimated to it, the resto transforms into a Moonkin and begins inflicting harm instead of healing. However, it is still a niche market.

Oh, and Holy Palas still exists, so there’s that as well.

BLIZZARD PLEASE, DO TWO THINGS FOR ME: STOP HARRASSING WOMEN AND MAKE PATCHES, I’M BORED, ONE IS HUMAN DECIDENCY, AND THE OTHER IS YOUR JOB. LOOK HOW BORED I AM, I DON’T CARE ABOUT STUFF LIKE THIS, AND THIS IS WHAT I’VE BECOME! I’VE BEEN TRANSFORMED INTO A CHICKEN HEALER BY THE WEEKLY MYTHIC CLEARS!

Ok, enough ranting; essentially, Moonkins can play a hybrid role; it isn’t OP, and it isn’t likely to be new meta; nonetheless, it might be useful with practice and testing. This also applies to Feral, however despite having one of the greatest ST DPS in the game and being rather good, they are still quite ineffective.

The “emt programs georgia” is a new hybrid role that combines the duties of an emergency medical technician and a paramedic. The program has been implemented in Georgia, Florida, North Carolina, and Texas.