Farming Simulator 22 is a new farming simulation game from the developers at Giants Software. They have taken everything that made FSX so memorable and brought it back for this sequel to their popular series. This latest installment has just been released, but does Farming Simulator 22 hold up?

Farming Simulator 22 is a simulation game that has been released on November 15th, 2018. The game was developed by GIANTS Software and published by Focus Home Interactive. The game features a large variety of vehicles to choose from as well as animals for the player to raise. 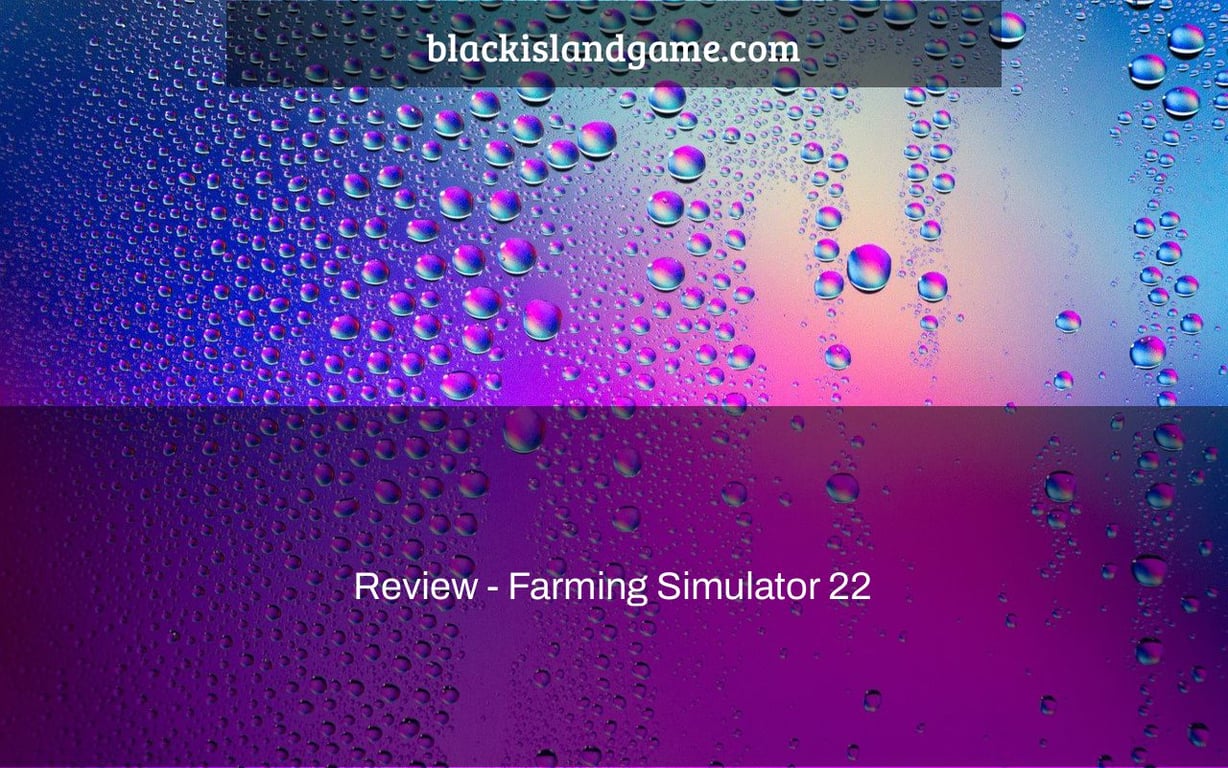 I was delighted to test out Farming Simulator 22 since it provided so much more than a single concentrated activity, as I just described. Lawn Mowing Simulator and Rover Mechanic Simulator, for example, both provided a unique pastime. While they both did a good job at what they were intended to accomplish, it became tedious for me. Farming Simulator 22, on the other hand, includes a wide range of tasks such as farming fields, harvesting crops, husbandry, and forestry. There is a lot to learn and accomplish in each of these primary pursuits, and each has its own set of vehicles and equipment. You’ll even have to arrange to cultivate and sell your crops at the correct time of year and when the crop’s economics is at its height. 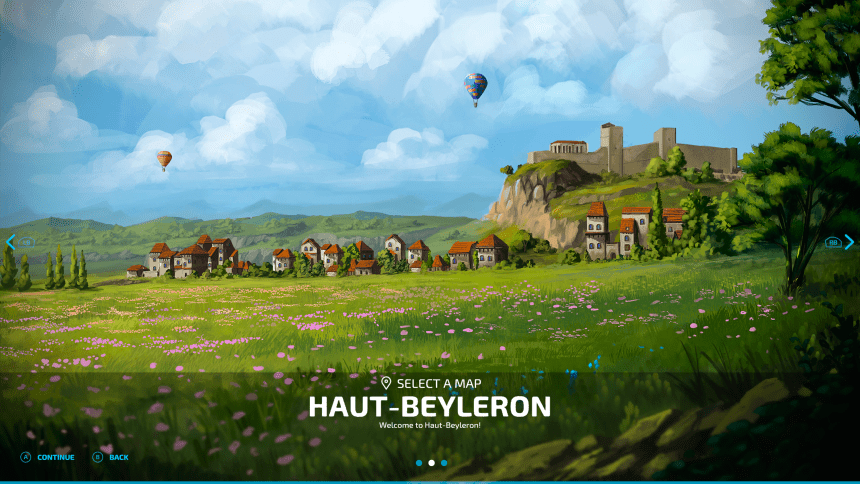 The three accessible levels are distinct from one another, each with its own layouts and town centers.

You’ll have the ability to personalize an avatar with some basic appearances and apparel when you first start up a new save file. There are a lot of alternatives here, and you can even dress up in name-brand attire. After you’ve established your farmer, you’ll be able to pick between three different areas. Each one has a unique look and town layout, and they’re all rather large. One of the coolest features in Farming Simulator 22 is that you can just purchase any piece of land and begin building on it.

There are three difficulty levels, although they seem to merely alter the amount of money and goods you start with and the economy’s aggressiveness. For example, the simple mode provides you with a large plot of land, as well as a choice of machinery, equipment, and even cattle. It also provides you with some spending money, and the economy is quite profitable. In the hard mode, you begin with nothing and a little sum of money to lease a machine with which to do tasks. 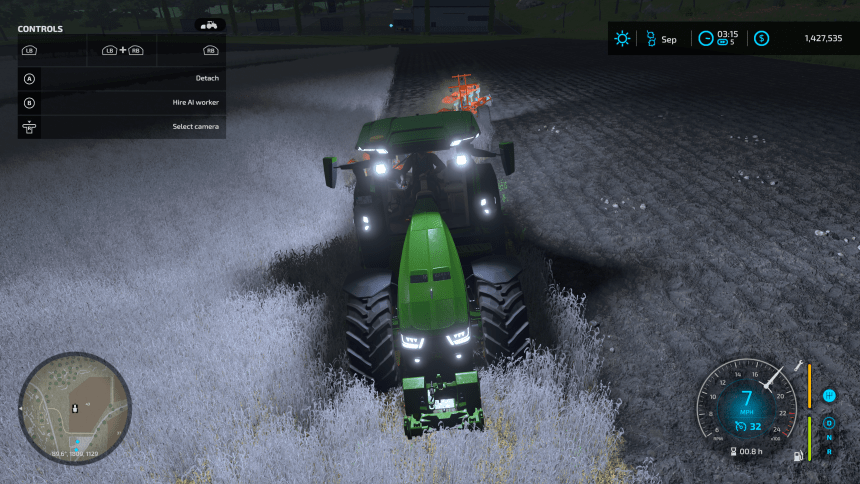 I lost more money than I earned on my plowing contract. Because I rented this equipment, it took two hours and I was charged twice.

You may play Farming Simulator 22 as you wish. If you merely wish to assist in the farming of other people’s land, you may take contracts, do the labor, and get paid. Alternatively, if you just want to grow cattle, it is also a possible option. Purchase a herd of cattle, chickens, pigs, and horses. You may raise cows and chickens to give milk and eggs, as well as sell them to local businesses. Maintain the health of your other animals and then sell them for profit, or become a lumberjack and sell your timber to nearby sawmills. You have the option, which I much appreciate. Each activity has its own set of regulations, procedures, machines, and other things to learn. 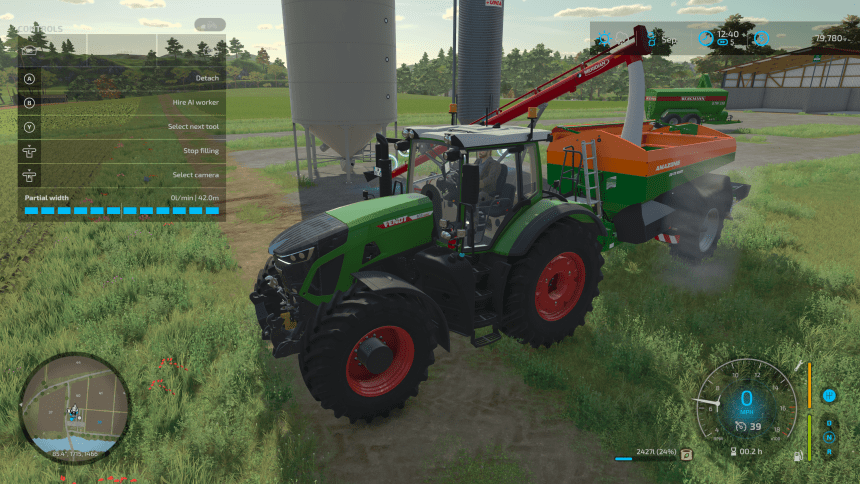 It took me a long time to find out how to load my trailer with the Silo I had just acquired and filled.

As a result, I had to look for training videos and articles that had been filmed and authored by the community. The majority of the instructions I discovered were for earlier versions of the software, which didn’t always function. I had enough fundamental knowledge to figure things out, but it was really inconvenient. I had to either stop playing and hunt out a lesson for every new item I wanted to make, or attempt trial and error with equipment and materials I believed would work. The user interface isn’t particularly intuitive, and it doesn’t offer anything to help you. I believe I’ve spent more time on Google than I have in the game itself.

Unfortunately, this isn’t the only flaw in the title. There are some unusual mechanics at work here, and although I admire the effort put into giving these items true weight, it doesn’t always work out. For example, I was going to use my Telehandler to pick up some material I had bought from the shop, but I forgot my counterweight on the rear. Because the products I bought were excessively heavy, I was tipped forward, which made me chuckle even though it was annoying. Instead of going back to acquire the weight, I discovered that I could still pull the material along by driving ahead with just the front wheels. The steering is also a little tricky here, and the machines don’t appear to be that precise. When you simply want to gently swerve in a direction, it’s quite simple to take abrupt jagged edges. Any kind of precise turn becomes exceedingly difficult as a result of this. 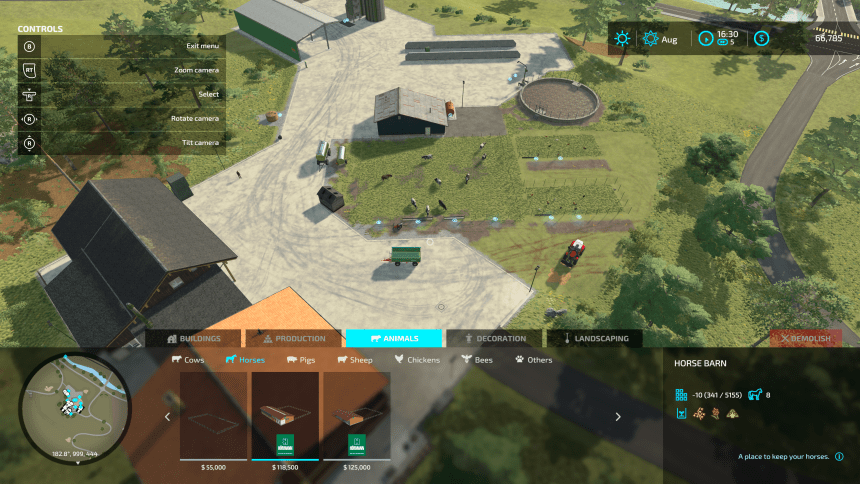 You may utilize the construction screen to construct additional structures, animal enclosures, decorations, and other items.

Fortunately, despite the annoyances of having to leave the game for lessons, it is genuinely pleasant to look at when playing. The three areas are diverse and feature attractive settings with distinct town and rural vibes. Seasons and weather are all realistically depicted. Even snow will accumulate, necessitating shoveling. The licensed devices are meticulously constructed to resemble their real-life counterparts, and they even move and work in a realistic manner (besides the steering). The main drawback is that certain textures and animations don’t look fantastic up close, but this is largely due to the animals and other human AI. All of the machines animate beautifully. Although there are some draw distance difficulties, performance seems to be OK, with no big slowdowns or stuttering.

Unfortunately, sound design is a bit of a mixed bag. All of the licensed machines sound authentic, much like their aesthetic appearance. However, the audio for them does not seem to be extremely clean or powerful. I couldn’t even hear the machine depending on the camera angle. Apart from that, the sounds of chirping birds, animals, and passing automobiles all contribute to the overall atmosphere of rural life. The soundtrack is fairly simple, consisting just of a tiny number of generic tracks from a few genres. I strongly advise you to play your own music while plowing a field, which may take up to two hours. 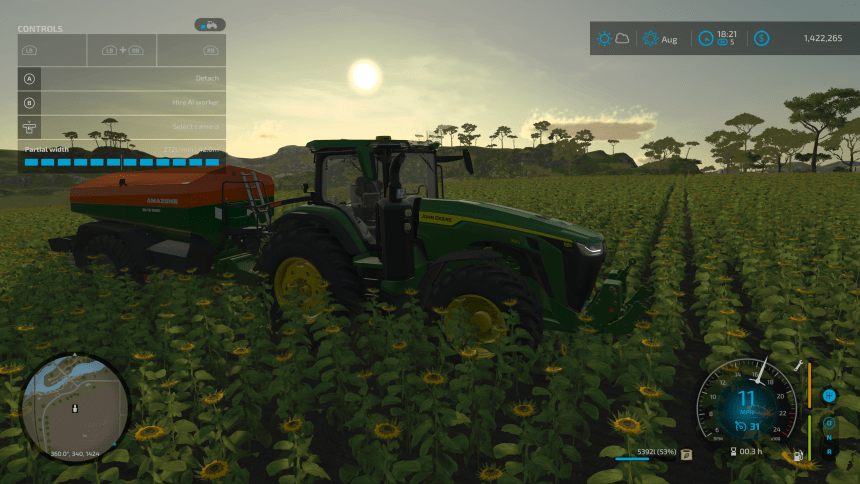 Farming Simulator 22 seems to be rather nice at times. On the equipment, there is a lot of attention to detail.

Farming Simulator 22 is a fun game to play if you can get beyond the hassles of being a beginner player and don’t mind using a second screen for instruction. There’s much to keep you engaged and challenged for a long time here. It allows you the flexibility to live the agricultural life you desire, and you may move at your own speed. It’s fine if you want it to be a calm experience. Go for it if you want to be an agricultural tycoon that buys everything and runs many businesses.

On the Xbox Series X, the game was reviewed.

The publisher donated a copy of Farming Simulator 22.

Farming Simulator 22 is a game that is developed and published by Giants Software. The game was released on November 20, 2017 for PS4, Xbox One, PC and Mac. The game has received mixed reviews from critics and players alike. Reference: how much will farming simulator 22 cost.

Will there be a farming simulator 22?

A: At this time, it does not appear that Farming Simulator 22 will be released.

What is the best version of Farming Simulator?

A: The best version of Farming Simulator is the PC.

What date is Farming Simulator 22 coming out?

[Breakdown] Gjallarhorn, Wolfpack Rounds and their implications for other Rocket Launchers